Skip to content
“There is nothing either good or bad, but thinking makes it so.”  –⁠Shakespeare, Hamlet
photo by Elizabeth Nichols 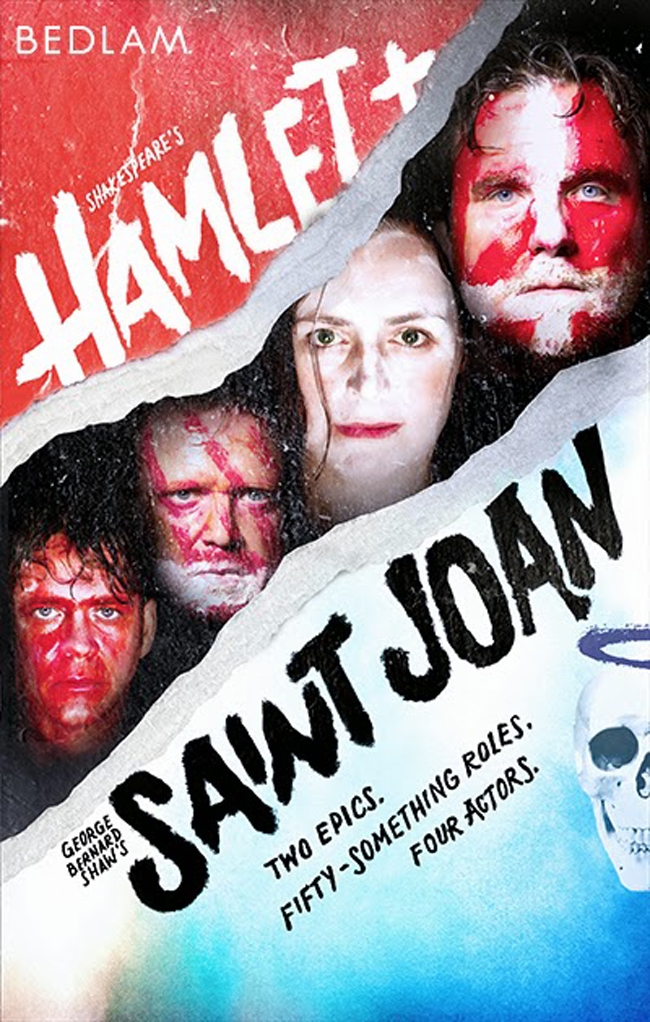 A company of four recreates Shakespeare’s Hamlet, in a production hailed as “invigorating,” “lively and brisk,” and “masterful” by critics. “Every member of Bedlam hears voices. Not of God and his saints, but of Shaw (who probably would have said that’s the same thing) and Shakespeare.”

The Lynn Redgrave Theater  Off Broadway

I left grinning, surprised that there was still ice on the streets. As far as I was concerned, the warmth and effervescence of what I had just witnessed had turned winter into springtime.

The Bedlam comany has staged a lively, modern and amiable production that feels brisk even at three and a half hours… Unlike those in so many contemporary Shakespeare productions, the actors here do not strain to get the audience to understand every line with little regard to the sound of the poetry—they speak the speech, to quote Hamlet.

Masterful… This juxtaposition of the comic and the tragic, coupled with the breathtaking talent of its actors, makes Bedlam’s HAMLET one of the richest, most entertaining theatrical experiences you may have this season.

Bedlam’s signature skill is capturing the soul of a classic, distilling it to its essence, and presenting it with vigor and immediacy… Tucker’s Hamlet epitomizes the ethos of Bedlam: he is frank, unsentimental, undeceived by fictions of theatricality, and yet expertly performed…As it did with SAINT JOAN, Bedlam again looks to a classic with neither irreverence nor dewy-eyed worship, but with critical and unrestrained eyes. In tiny confines, with a bare minimum of accoutrement, and the tirelessness of four expert performers, HAMLET comes alive, as Bedlam shows itself through its unique ability to find the essence of a classic and its characters to be an importantly innovative voice in New York theater.

This Hamlet could be renamed Everyman’s Hamlet. The actors who exert themselves here are altogether focused on the old myth, and make it sparkle in spite of its age. And, truth be told, they outdo those more pretentious companies who trip themselves up by staging Shakespeare with too much fuss and forget the play is the thing.

Bedlam’s production is full of twists and turns like these that at times make the audience gasp with delight at the creativity of the cast’s choices…. Every member of the ensemble is so full of energy it is impossible not to be captivated by his or her every movement…. it is undeniably Eric Tucker’s portrayal of Hamlet that makes this production as powerful as it is. Tucker takes the character through a myriad of emotions, all while maintaining a sense of control that causes you to question how much of Hamlet’s eventual madness is real… Bedlam’s Hamlet is a rollercoaster of high-energy, emotional powerhouse performances that you don’t want to miss.

Acted with sublime ferocity…An experience so intense and concentrated that you’ll feel as though you were part of the action—and it moves so fast that you’ll scarcely be conscious of the play’s extraordinary length.

For Bedlam, under Eric Tucker’s direction, the minimalism is a means to an end: the most fluid, most high-pressure, and most direct access to Elsinore possible. It’s as though centuries of maudlin costumes, overwrought sets, and bad English papers have vaporized to leave the real animal, in flesh and blood, to roam free. And it is a fiery beast. Nichols and O’Keefe, along with Ted Lewis and Tucker (as Hamlet), run breathlessly around the tiny stage of Access Theater, leaping into their many characters, tossing the necessary props, and churning out the verse as though possessed by the author’s demons. Gape too much at the performers’ virtuosity, though, and you’ll miss the direction, which is a lesson in choreographic detail. The placement of a hat, the rustling of backstage props, the sudden revelation that an overlooked corner is a performing space—each moment taps the story for extra ounces of nuance.

An engaging, highly physical production of Shakespeare’s complex masterpiece that feels as raw and incestuous as the state of Denmark itself…At the center of the whirlwind is Eric Tucker’s seething, manic Hamlet…The remaining 20-plus roles are divided among Ted Lewis, Andrus Nichols and Tom O’Keefe, who transition effortlessly between characters…. There’s a fiendish precision behind the speed; hits land as swiftly and directly as sword blows.

From the instant the first line is uttered in the pitch-black theater to the moment the lights go down on a stage of corpses in the final act, Bedlam’s production of Hamlet never fails to be one of the most thrilling theatrical experiences to come along in recent memory. The audience is sucked into the protagonist’s world of madness and betrayal with no hope of escape… The fast pacing and constant action, punctuated by dozens of Shakespeare’s most famous lines and speeches, ensure that audiences will come out of this play thinking of nothing but the next time they’ll be able to see it again. Bedlam’s Hamlet is a production and an experience that should not be missed.

A look into various productions of Bedlam's Hamlet